The Animal Shelter Expansion project includes constructing a 10,868 square foot addition to the existing animal shelter facility, light renovation to the existing animal shelter facility, and addressing parking needs for the animal shelter and the neighboring Utilities Department. The interior layout of the addition includes a welcoming lobby with adjacent visitation rooms for both dogs and cats, support spaces for deputies and staff, and additional holding area capacity. Renovations will occur in the existing facility, after the addition is substantially complete, which primarily consists of interior layout adjustments in coordination with the addition and a connecting corridor. This project was substantially completed in 2021.

The Historic Courthouse Stabilization project includes the demolition of the former Sheriff’s office and stabilization of the courthouse where the two buildings connected to one another. The courthouse’s exterior façade is repaired at the former connection to match the existing building materials. New utility and mechanical infrastructure will complete the stabilization effort, providing new mechanical equipment to maintain the building’s conditioned space, and establishing an independent electrical service. The area between the Historic Courthouse and Historic Jail will remain as a lawn area, and will now be connected by the campus’s brick paver sidewalks. This project was substantially completed in 2019. 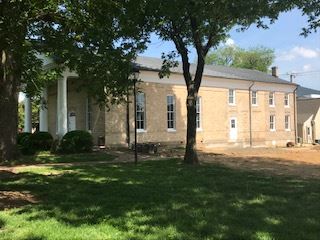 The capital project’s team and Fire Rescue & Emergency Management Department are jointly working to construct an additional bunkroom space for Company 6. The project will consist of constructing an addition, reworking the interior layout of the existing bunkroom and support spaces, and minor site work. Construction of the expansion commenced in 2021.