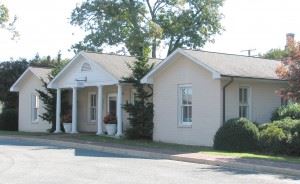 courthouse was a Works Project Administration (WPA) project built during the 1930s. The WPA was created in 1935 by the Executive Order of President Franklin D. Roosevelt to provide jobs to citizens unemployed during the "Great Depression" of the 1930s.

Other Uses for the Building

The moderate size of the building, which was used as the 20th century offices for the Voter Registrar, Juvenile Court and the most recently as the County Administrator's offices, allowed the courthouse to be the focal point of the county seat. The plan of the small buildings around a larger and sometimes elaborately designed courthouse preserved the rural village settings.

The WPA was Works Progress Administration when it was started in 1935. The name changed to Works Projects Administration in 1939 when it became part of the Federal Works Agency. It is not open to the public