This imposing building, built by Samuel Alsop in 1838, was a popular stopping place since it was ideally situated on the well-traveled road from Fredericksburg to Richmond and Williamsburg. It was known for its hospitality and delicious meals.

At one time, there was a large stone in front of the Inn which had been used b 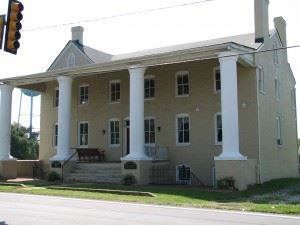 y the Indians to grind their corn. It currently is displayed at the Spotsylvania County Museum.

Other Uses for the Building

In its past, it has served as a school, post office, tavern and during the Battle of Spotsylvania Court House, as headquarters for General Jubal Early. It was also an observation point for General Robert E Lee during this battle.