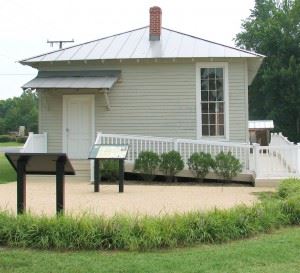 This one-room school is typical of the schools scattered throughout the County beginning in 1870 with the establishment of the public education system. This 1930s school for African-American children was originally located on Stubbs Bridge Road. The school was moved to its present location at the Marshall Center in the Spotsylvania Courthouse history district in 1999. The one-room school was closed by the School Board in 1943.

Amenities of the School

This modest building remains largely unchanged. Its clapboard walls enclose a vestibule, a small cloakroom, and a single classroom where children in grades 1 through 7 were taught. The building contained no plumbing and was not wired for electricity. A cast-iron stove was the only heat source. In its original rural setting, the schoolyard included an outhouse and a dusty play lot.

The Marshall Center is the site of the Fork School - a one-room school for African American children. It is also the location of the old high school for the county's white children, now the C. Melvin Snow Memorial Library. It is named in honor of the man who in 1945 became Superintendent of Spotsylvania Public Schools after serving as principal of the white high school.

The Good Hope School, another colored school in the County, for colored children in grades 1 through 7 was opened as early as 1920. Several years later, however, it was in serious decay and a new building was proposed and approved by the Spotsylvania County School Board in 1923. The first recorded teacher was the experienced Lula Broadus who, at that time, lived in the Brokenburg section of the county. Her salary was $40 per month and the school operated for six months in the year.

In the January 7, 1929 School Board minutes, Superintendent John Hunter Chiles announced that "the school had been completed but it was still in need of insurance."  He suggested that $350 of insurance was required for the building and its contents.  Although the construction was complete, including a galvanized roof, the Superintendent recommended painting the outside to “keep the weather boarding from warping and pulling off.” (January 11, 1929 School Board Minutes)

First Teacher at the School

The new school, at the corner of Lewiston Road and Route 208 near Lake Anna, got its first teacher, Lillian White, at a salary of $40 per month for an eight-month school year. She was appointed on May 5, 1930 to begin later in the fall.

Many years later in 1996, the empty and decaying Good Hope School stood in the brush. A county committee was established to save the building, and both the Fredericksburg Area Builders Association and architects Herlong Associates agreed to renovate it. Its owner at that time was Delegate V. Earl  Dickinson of Louisa County.

It was decided to move the building to the Marshall Center and enjoy it as a local attraction to show how a one-room school for colored children was built and used in its time. Before the school could be moved, however, it was destroyed by fire.