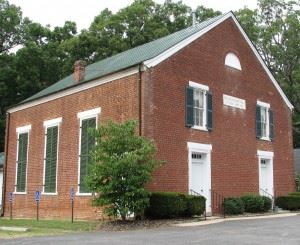 During the Overland Campaign (Battle of Spotsylvania Court House), Zion was put into service as Confederate General A.P. Hill's III Corps headquarters and as a divisional command post for General Henry Heth. War records tell us that General Lee and his staff frequently met at Zion. War records also indicate that the Ninth Virginia Cavalry Regiment, which was made up of men from Virginia’s Northern Neck, Spotsylvania and other counties in the immediate Fredericksburg area, camped just a few yards behind Zion for about a week.

During the Battle of Spotsylvania Courthouse the building was used as an observation point, likely to watch Union lines located a mile to the east and intersecting with the Massaponnax Church Road (immediately in the right front of the church building). It was also used as a hospital for southern troops. The primary Confederate field hospital was located a little over a mile to the southwest, and one of the Union's larger field hospitals was located about three miles to the east of Zion.

Church records indicate that Zion suffered "major damage" during the battle, but they are not precise beyond that point. However, we do know its original floors were bloodstained and there was some damage to the exterior walls and to the roof. When the original floors were replaced in the mid-20th century, a Confederate cavalry saber was discovered under the church. It was likely left there by a soldier from the Ninth Virginia Calvary Regiment. Perhaps he was seeking refuge from battle or the heat of day.

General Lee wrote numerous letters to the U.S. Secretary of War complaining of damage to churches in Virginia by the invading Union troops. In Culpeper Courthouse alone, for instance, every church was razed by Union troops, save two. Thankfully Zion's fate was not that severe.

Another interesting feature of Zion is that the door on the south wall (gravel parking lot side of the building) was used as a slave entrance to the balcony. After the war, during Reconstruction, the door was used as an entrance for freed African Americans until the Jim Crow Laws were abolished and the door was sealed forever. The balcony is closed to the public for safety reasons.

Zion has an active Methodist congregation and the building has been in continuous use as such since 1859. Therefore, we request that you please show proper reverence during your visit. Please take the time to visit our church cemetery where three Confederate war veterans rest.