The Court House village suffered greatly from the nearby fighting. Trails signs in front of the 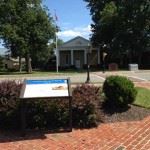 modern courthouse building tell the story. The Battle of Spotsylvania Courthouse is a continuation of the Battle of the Wilderness. General Grant's decision to move forward to Spotsylvania changed the course of the war. For the first time in the Eastern Theater, the Army of the Potomac went forward after a battle and maintained control of the initiative for the rest of the war. If viewed as one campaign, the Wilderness/Spotsylvania Campaign is the bloodiest in America.