Located at the intersection of Lake Anna Parkway and Business 208, Health’s Salient Civil 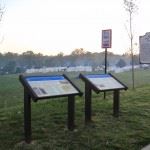 War Trail (CWT) signs tell of the fierce fighting that occurred at Spotsylvania Court House Battlefield. The CWT signs were installed in March 2014.

The Civil War Trails Markers are about "Toughest Fight Yet" and talks about the Battle of Spotsylvania Court House and what led to the battle of the Mule Shoe and Bloody Angle. The second sign talks about the Dabney Farm and the fields in front of the signs and what happened there.

Find out more about Civil War Trails and other stops check out their interactive map.

Highway Marker sign Number 127 reads: Heath’s Salient Battle Site - After four days of probing attacks, General Ulysses S. Grant ordered a frontal assault against the Confederate lines at Spotsylvania Court House on 12 May 1864. The focal point of the attack was the Muleshoe Salient, an outward bulge in the Confederate Line. While the II and IV Corps struck the head of the salient, resulting in the struggle for the "Bloody Angle." General Ambrose E Burnside’s IX Corps assaulted the Muleshoe’s eastern face, known as Heath’s Salient, located nearby. Confederate defenders, ensconced behind log works, repulsed the early morning attacks and at 2 p.m. counterattacked through this area. During more than 20 hours of fighting the Federals lost some 9,000 killed, wounded, and captured. The Confederates lost an estimated 8,000 casualties.