Christ Episcopal Church was constructed in 1841. It is believed that clay, from 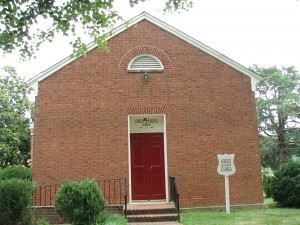 what is now a field at Robert E. Lee Elementary School was used for the bricks. The Church was consecrated that same year by the Right Reverend Bishop More. This little church is exceptionally well preserved and is a fine example of Virginia's late Federal period architecture.

Christ Church served as a hospital during the Battle of Spotsylvania Courthouse and still bears scars received from shelling during the battle.

Bible Dated Back to 1754 Preserved

After an Episcopal congregation in Mattaponi dissolved, the church's large lectern Bible (King James Version), dated 1754, was brought to Christ Church. It is now prominently displayed as a church treasure.

A Spotsylvania Church Is Born

Around the corner from Spotsylvania Courthouse stands Christ Episcopal Church. The original congregation of Christ Episcopal Church was formed in 1839 when several families separated from St. George's parish in the city. The church was built using bricks made at a nearby clay field (now Spotsylvania Elementary School), by ancestors of some members of the current congregation, it was completed and consecrated in 1841. Christ Church is the sole survivor of the original three buildings (church, courthouse, and jail) of the Spotsylvania Courthouse area.

The 1754 pulpit Bible that Christ Church now proudly displays was printed in London by the King’s appointed printer. This Bible was shipped to Virginia and, as tradition has it, was used in worship for more than 75 years in the colonial Mattaponi Church, affectionately known as the “Old Mother Church” of Spotsylvania County. When the Mattaponi Church closed its doors in 1828, Lewis A. Boggs, son of the last priest to serve at the church, kept the Bible in hopes of keeping the memory of the Mattaponi church alive in another church home. When Christ Church opened and Boggs became a member, the Bible became the first pulpit Bible of Christ Church. The Bible, which survived the nearby Civil War battle of 1864, continues to be used on special occasions to this day, over 250 years after its publication.

In May of 1864, it became clear that Union forces had turned south and were headed for the Courthouse area. During local battles, Christ Church was used as a hospital and shelter for those dying and wounded at the nearby Bloody Angle. Due to the proximity to the battlefield, Christ Church was a target of both artillery and rifle fire. Extensive artillery damage to the roof was repaired soon after the war, but pockmarked bullet holes still adorn the original brick exterior as well as a cannon left in the rafters of the attic.

A Church Member Fights for His Home

To the left of the Sanctuary are the four graves of Pvt. Edgar Harrison (E Company of the 9th Virginia, CSA), his wife, and their two daughters, ages 3 and 6 at the time of the Battle of Spotsylvania. They lived on the Harrison Farm, about a mile north of the Church. As the Confederate army prepared defenses to counter the encroaching Union Army, the Confederates encircled the Harrison Farm with trenches, effectively ruining Edgar’s recent planting. From his position on Myer’s hill, scant miles from the Harrison Farm, Edgar watched in horror as flames and smoke consumed his home. His wife and daughters, however, miraculously survived.

Christ Church continues to have an active Episcopal congregation and the building has been in continuous use since its opening. We request that you please show proper reverence during your visit. Please take the time to visit our church and read the historical markers located around the property.

This information was provided by Christ Episcopal Church