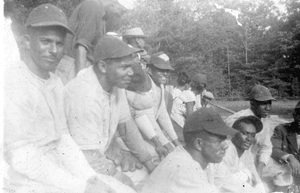 I loved baseball. Poppa [Alfred L Fairchild, Sr.] owned land adjoining the white high school. I used to go through the woods to climb a tree to watch the white boys play. I too could play baseball even though I didn’t have enough money to buy gloves, uniforms, balls and bats. I was a catcher. When school’s home- coming and neighborhood games were being played, I crawled under seats and bleachers and collected all the popsicle bags that people threw on the ground. There was a company that paid cash for those bags, so by the time I turned in mine, I earned enough money to buy my baseball equipment. I was first a member and later a manager of the Spotsylvania Yellow Jackets. We used to play on the field owned by Mr. Lawson. -Memories of Layton R. Fairchild Sr.

Elmore Lawson, born January 26, 1882, to Isaac and Julia Weathers Lawson, was a farmer, carpenter and construction contractor. He even operated a sawmill on his property. He was the husband of the former Cora Stannard and the father of 17 children. Long after Cora’s 1938 death, he married Lizzie Matilda Nelson.

The Start of the Yellow Jackets

He noticed that baseball was played in back yards, on church grounds and in open fields, while the white community enjoyed diamonds for that specific purpose. Next to one of his properties was vacant land once owned by the Liston Lewis family of Sylvannah Baptist Church. The locals played baseball there and organized into a team that competed with other regional teams, especially on Saturdays and after church on Sundays. In July 12, 1952, Mr. Lawson bought those 9.64 acres and constructed a diamond.

The team called themselves the Spotsylvania Yellow Jackets, and the following young men all honed skills that perhaps in another time would have brought them fame in a professional league: