The court system of Spotsylvania was first established at Germanna in 1722; 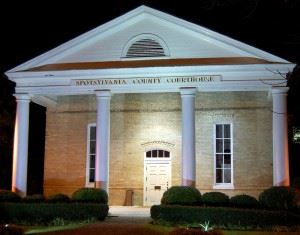 moved to Fredericksburg in 1732; to the "Old Courthouse" in 1778; and to its present site in 1839. Lewis Rawlings, owner of the Tavern, gave the County ten acres for the present Courthouse green. The team of Malcolm Crawford, carpenter, and William Phillips, brick-mason, who helped Thomas Jefferson build the University of Virginia, won the contract and completed the Courthouse in 1840.

The battering sustained by the Courthouse during the Civil War necessitated major repairs in 1870. By 1900, the building was declared unsafe; subsequently, a new, enlarged building of similar design was constructed on the site, using cream brick instead of red. The original Doric columns were salvaged and put in place. In 1964 the wing on the southwest corner was added to the house government offices.

Official County records were buried during the Civil War, and with the exception of three books which were damaged by water, the records are complete, dating from the founding of the County in 1720 to 1721.

The Spotsylvania Courthouse bell was cast by the Meneely Bell Foundry, West Troy, New York in 1880. The bell was originally located in the belfry of the Courthouse prior to the building’s repair in 1901. The bell was rung to announce court sessions and for emergencies. The bell is currently on a portable stand and is rung on special occasions.