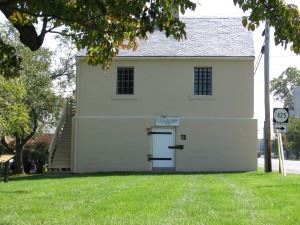 The Masonry Jail was built in 1855 after the 1839 Jail burned in 1853. The exterior brick walls are two feet thick while interior cell walls are lined with thick oak planks. A front iron door grate allowed for air circulation in the warm weather while a stockade door could be closed when necessary. Original iron bars on the windows reportedly were removed in the early 1940s for war materials. In 2004, bars were replicated and installed along with the sign over the door admonishing ‘no talking to prisoners’.

After the Chancellorsville Battle in 1863, the Courthouse green and Jail yard were holding areas for Union prisoners. The Jail ceased to be a prison in 1943 but was leased to Rural Telephones of Milford and then renovated for County offices. After being used for storage for many years the Spotsylvania Preservation Foundation, Inc. (SPFI) in 1998 began the process of an adaptive reuse as a Jail Museum. 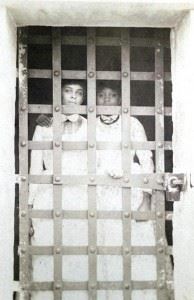 A jail was always an important part of court facilities. May 6, 1887, two young black female prisoners in the Spotsylvania County Jail were photographed during a tour of Civil War battlefields by Massachusetts photographer, W H. Tipton. Those women were Mary D. Waller and Jennie E Boggs, jailed June 13, 1886 and subsequently indicted for housebreaking, grand larceny and felonious assault on William S.E. Waller and his sister Jane. The judge was Robert E Waller.

Waller recused himself because he was one of three witnesses for the Commonwealth. Presiding instead was the Honorable E.C. Moncure, Judge of Caroline County. The women pleaded not guilty and requested removal of trial to another county. Their request was denied. They had several court appearances between their arrest and the time of this photograph.

Finally, in the March Court, 1888, "The attorney prosecuting for the Commonwealth by consent of the Court saith that he will not prosecute further on behalf of the Commonwealth versus Mary D. Waller and Jennie E Boggs who stand indicted for felonious assault, grand larceny and housebreaking. Therefore it is ordered that they be discharged from the custody of the Jailer of this Court." After nearly two years, on March 6, 1888, the young ladies walked freely from the Spotsylvania County Jail.

The old Court House and Jail are most infamously known for the apprehension and escape of George Boxley - known in Virginia history as a white man who facilitated the planning of a slave insurrection by allowing slaves to meet in the store on his property. Events and motives of individuals, as well as the nuances of emotion, are always more complex.

George Boxley was a first generation American born in 1780 to English immigrants Thomas and Mary Boxley. He was the oldest of six children. By 1803, his parents had both died and he and a cousin were joint executors of his father's estate. Of his father's 1,979 acres, known as The Grange, George was willed 170 acres and two slaves, Harry and Dafney, valued at $460. His father's will was to return all slaves to the estate and free them.

Live a Life of Freedom

In 1805, George married Hannah Jenkins from a nearby farm and they began a family. George was a soldier in the war of 1812, and returned determined to lead a life of freedom for himself, his family and slaves.

An educated man, George Boxley read and spoke often of the contradictions of the American constitution versus its use of slaves. This was a special point with him being a citizen of Virginia, the largest slave-holding state. He scolded against slavery regularly which did not endear him to his neighbors. It also gave enslaved men and women the idea that he could be counted on to help them if needed.

An opportunity presented itself when two escaped men came to his store late one evening, reportedly having been beaten earlier in the day and threatened by their owner with sale away from their families. Boxley allegedly gave them two of his horses, some money and directions to Pennsylvania.

When their absences were noticed, a slave woman named Lucy reported that she had heard talk around George Boxley's about a slave revolt. Lucy's mistress, Ptolemy Powell, reported the rumblings of a slave insurrection to the Magistrate on February 22, 1816, who arranged for an investigation. Boxley could not produce a bill of sale for two missing horses and was arrested for assisting slaves to escape. Twenty-seven so-called black conspirators were also arrested.

Even though Boxley was imprisoned and awaiting trial, Virginia law did not allow blacks to testify against whites. The blacks who were arrested were either hung or sold south. In May 1816, George's wife Hannah and their children visited him in jail - the new brick jail built in 1813 and situated next to the clerk's office and across the road from the Court House built in 1801.

Not waiting to find out his fate, George escaped the day after his family's visit. It is believed that his wife smuggled a saw in the hem of her skirt into the jail. The Superior Court Grand Jury returned an indictment against Boxley for insurrection; his wife was never blamed or charged for aiding her husband. She remained at their family home and slowly and quietly sold most of their belongings, waiting for word from her husband.

Boxley first surfaced in Pittsburgh, Pennsylvania where he soon signed a power of attorney from Washington County to sell his land in Spotsylvania. Soon thereafter he saw a Spotsylvania County newspaper advertisement for his bounty, and he left and settled near Cincinnati, Ohio where he worked as a school teacher. He published two anti-slavery articles under a pen name. He finally got word to his wife about his whereabouts and she and their children followed a friend's relative from Virginia to Ohio where they all met in Fayette County and lived for seven years. The couple had five more children.

Boxley Became Justice of the Peace

Bounty hunters were still trying to find him in 1821, but Ohio Governor James Preston would not pursue the matter. Comfortable in his new life, George sought the job of Justice of the Peace in 1824, but he was publicly challenged about his past and forced to admit his actions to his neighbors and friends. Three bounty hunters tried to capture him while he worked in his field and his sons successfully fought them off. The State of Ohio filed charges against the bounty hunters for kidnapping and awarded George $10 in damages.

Boxley left his family for Missouri, using the name George Burke, but soon read a newspaper account describing his close call in Ohio. He decided to return, get his family and relocate. They moved to Indiana, built a home on what he named Pioneer Hill and prospered. He built a school for his children and welcomed other pioneer families who were seeking a better life. More importantly, he lived to see the North defeat the South in the Civil War and the end of slavery for which he advocated for so long.