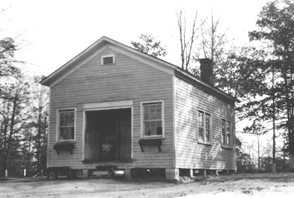 Nearly two months later on April 1, 1878, Messrs. Chartters, Furneybrough and Talley sold one of those acres for $10 to the trustees of Piney Branch Colored Church represented by Claiborne Lewis, John Lewis, and William Parker for the purpose of educating the population of Negro children who lived in the area and attended the church. Even though situated next door, the church building was not owned by the membership until 21 years later on September 12, 1899, when two acres consisting of a burial ground “... and all buildings thereon” were sold to them for $1 by W E and Sarah Embrey.

I began my education in the old Piney Branch School. This was the very first building and my parents also attended there. My first teacher was Miss Otelia Upshaw. Before too long I was calling her Aunt Teelie. Piney Branch Church, standing nearby seemed to have been the parent body. The preacher, teacher, and all parents were our leaders and were highly respected and involved in this little community called Piney Branch.

Piney Branch School operated for five months during the academic year. It was not until the 1919 to 1920 academic year that the school was officially named “Piney Branch” in school records. Prior to this date, it was simply the colored school in Screamerville. It was one of four African American schools in the Chancellor District; the other three were Dig 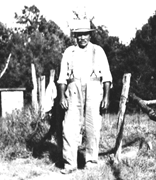 By 1945, the Piney Branch School and others like it were no longer sustainable. The Spotsylvania County School Board, consisting of T. B. Sale, J. C. Hawkins, J. Henry Burrus, and B. M. Pates, sold this particular school at public auction for $280 on June 4, 1945. The successful bidder was Piney Branch Baptist Church, represented by its trustees Samuel Ford, Carl Lewis and Thomas Lewis (left, courtesy Ida Lewis).