Spotsylvania is almost directly in the middle of the aforementioned gold-pyrite belt. The area near Louisa County and what 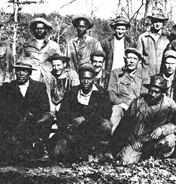 became in 1983 Lake Anna, was formerly called “Gold Hill” and was the location of the Goodwin Mine. It was the third largest gold mine in the country between 1830 and 1849. Gold was first discovered here in 1829, but by the 1880s, Virginia mining had reached its peak.

Shut Down of Gold Mines

Small scale gold production in Virginia continued until World War II when, on October 8, 1942, the War Production Board issued Limitation Order L-208, which branded gold production as a non-essential and directed all but the smallest of gold mines to shut down so their labor force could be used elsewhere to support the war effort. Economic conditions following the war were such that few miners returned to mining, so only a handful of mines reopened. The last commercial mines producing not only gold, but lead, zinc, and silver, were closed by the late 1940s.

Mining in the Livingston Region

Enterprising and free black men and women lived in the lower Livingston district where there was a cluster of mines, mainly gold mines, that operated successfully in the 1800s. Other minerals produced were:

These mines were part of the gold-pyrite belt that runs southwest 140 miles through Virginia beginning in Fairfax County. Among the Livingston area mines were the Higgins (aka Huggins), Johnston's Prospect, Grindstone and the Mitchell mines. Of these four mines, the Mitchell and Grindstone mines played important roles in the lives of three free African Americans and their families: Molly Pierce, Sally Ham and John King.

When Andrew Mitchell purchased 300 acres from Robert and Margaret Hooe of Stafford for $250 in 1796, it is uncertain whether he knew his land contained gold. By 1812, he had bought an additional 56 acres and was deeply in debt to Joshua Long who financed his gold mining interests. Mitchell entered into agreement with Robert Crutchfield to hold his debt. In exchange, he put three slaves in trust to Crutchfield: Gilbert, Dick and Harry. If Mitchell could not pay his debt by a specified date, the slaves could be sold at public auction at the Court House.

Mitchell used these three slaves more than once to secure his debt. He died intestate and his heir, Joseph (and Joseph’s wife Willey M. Parker Mitchell), sold 326 acres to Joseph Watkins of Goochland and 30 acres of his father’s estate to a free woman named Molly (aka Polly) Pierce on March 16, 1833. Ms. Pierce was freed sometime between 1820 and 1830, for she is listed in the 1830 U. S Census as living with a free Negro girl. The land Ms. Pierce bought was in the northwest corner of Andrew Mitchell’s estate and bordered the Smith estate, Grindstone Hill Mine, and Joseph Mitchell’s mill pond. Her deed of sale was recorded on May 6, 1833.

It became necessary for Robert Crutchfield to sell Gilbert, Dick and Harry - the slaves in trust to him by Andrew Mitchell. Gilbert was bought by Molly Pierce. On the same day that her deed of sale was recorded, she manumitted Gilbert and recorded his surname as “Baylor.” They lived together until her death in 1859. She willed her entire estate to him. He died in 1866, leaving his real estate and possessions to his circle of family and friends, including one brother and one daughter. 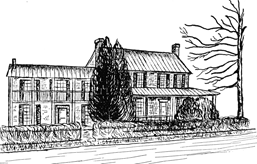 Only a few farms from Molly Pierce and Gilbert Baylor lived Sally Ham (born in 1810), a free Negro woman. October 19, 1838, she bought 50 acres for $125 cash from William H. Andrews and Mary E A. Andrews, proprietors of Andrews Tavern and Post Office.

Her land was adjacent to the Mitchell Mine, approaching it from Ridge Road. Ham had 11 known children, and later in life, some of her children used the surname “Coleman” in honor of their father, Lindsey Coleman.

In 1855, the Mitchell Mine was sold at public sale for $978 to partners William H. Andrews and Jonathan Johnson by the executor of Joseph Watkins’ estate (per instructions in his last will and testament).

Over time, the Ham land proved to be some of the most inexpensive and unproductive in the entire region. By the time of her death in 1890, its value was $1.50 per acre in comparison with nearby values of from $3 to $6 per acre.

Approximately four miles from the Ham property lived John King with his wife Jane, and their daughter, also named Jane – all free people before the Civil War. Born in 1784 to unknown parentage, Mr. King was a carpenter. He bought 68 acres from Herod and Nancy Wright for $115 cash on May, 25, 1846, and lived on property situated between the families of Thomas and Robert Mastin.

More specifically, his land was adjacent to the Grindstone Mine. Mr. King lived with his wife until his death from dropsy at age 76 on May 7, 1860. In today’s parlance, dropsy would best be described as swelling due to congestive heart failure. At the time of his death, his real estate was valued at $160 and his personal holdings were $35. His widow lived another 14 years, dying of graceful old age at 80 in 1874, and his daughter and her family remained on the estate. She died of “la grippe” at age 70 in 1891.

What about the mine? After William Andrews died, the 326-acre Mitchell Mine, owned by his partners, was surveyed and sold to one of the heirs of Andrew Mitchell, B. Arthur Mitchell (living in Philadelphia, Pennsylvania) on February 1, 1868, for $16,000. He and his shareholders borrowed money for the purpose of developing the mine, but their efforts at long-term profitability were unsuccessful, as the Virginia gold mining industry did not recover after the Civil War and prospectors moved west to California.