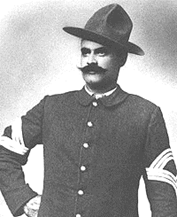 1859 to Henry and Polly Brown, who would have believed that he would become an American hero of the Indian Wars?
Seeking a better life than working on Spotsylvania plantations, he left his parents and migrated to Pennsylvania where he soon joined the U. S Army through its Harrisburg office, assigned to the 24th Colored Infantry, Company C (one of the four so-called Buffalo Soldier units). This 5 foot 9 inch, brown-eyed, dark brown-haired, yellow-skinned man decided to become a professional soldier. He accepted his second enlistment at age 26 on March 23, 1885, serving at Fort Grant, Arizona.

Fort Grant was key in defending settlers from attack by the formidable Apaches. In addition to fighting Indians, Sergeant Brown’s tasks were to guard the post and protect byways against bandits.

May 11, 1889, Sergeant Brown was one of 12 soldiers from Fort Grant accompanying Paymaster Major Joseph W Wham. In two covered wagons they were carrying $28,345.10 to Fort Thomas and beyond to administer soldiers’ pay. Sergeant Brown was riding with the Major. Granted permission to ride with them by horseback was Mrs. Frankie Campbell, well-known gambler and wife of a Fort Grant prisoner.

Mrs. Campbell rode in front of the two wagons. As they turned around a ridge, they were stopped by a boulder lying in the middle of the dusty trail. While trying to determine how to move it, a yell and gunfire from the hills tore through the quiet as a gang of men — not wearing masks — descended on the soldiers and began a gunfight for the gold. Sergeant Brown was shot in the arm and in his side. He continued to battle on open ground until being shot once more in the other arm.

After the nearly two-hour battle, the robbers stole the money. Nine men were captured and a sensational trial ensued where it was revealed the mayor and primary employer encouraged the robbery supposedly as a form of protest. He claimed to be saving the Mormon population from the encroachment of the U. S Government. All were acquitted. The money was never recovered.

Paymaster Major Wham testified to the U. S House of Representatives Committee on Military Affairs. The committee concluded that the soldiers displayed unusual courage and skill in defense of the Government’s property. Highest praise was given to Sergeant Brown for his gun fighting, and to another soldier, a wounded Isaiah Mays, who crawled two miles to the nearest home for assistance. February 19, 1890, both men were presented the Congressional Medal of Honor by President Benjamin Harrison, the highest award for valor in action against an enemy force which can be bestowed upon an individual serving in the Armed Services of the United States.

One month later, Sergeant Brown re-enlisted for a five-year tour back at Fort Grant, Arizona. At the end of this enlistment, he was discharged March 22, 1895 at nearby Fort Huachuca, Arizona. Even though still recovering from his wounds, he received a “very good” evaluation. During his fourth enlistment which ended March 23, 1898, with an “Excellent” evaluation for service at Fort Douglas, Utah, he was promoted to Sergeant Major.

For the next few years, he was in the Philippine Islands and served a tour at Fort Assiniboine, Montana. For a seventh time, he enlisted for a three-year tour on March 24, 1904 at Fort Assiniboine. He was approximately 43 years old when he fell ill, and was discharged June 3, 1905 to the General Hospital in Washington, D.C. for Headstone first National Cemetery disability. Not only had he suffered a debilitating stroke, but he still carried one of the bullets from the 1889 gunfight in his body. The last word in his service record is “Excellent.”

After his hospitalization, he was cared for at the U. S Soldiers’ and Airmen’s Home in Washington, D.C. until his death on September 5, 1910. He never married. He is buried in the very first National Cemetery which is adjacent to the Soldiers’ Home.