I have the honor to report that at 12:30 p.m. this day the Second Ohio Cavalry, 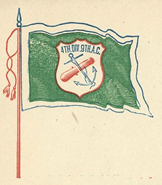 stationed at Piney Branch Church, were compelled to fall back, being attacked by superior forces, consisting of one brigade of cavalry, with two pieces of artillery. I immediately ordered the Fourth Division in readiness, and marched the Twenty-third U. S Colored Troops to support the cavalry. On arriving at Alrich’s, on the Plank Road, I found the Second Ohio driven across the road, and the enemy occupying the crossroads. I ordered the colored regiment to advance on the enemy in line of battle, which they did, and drove the enemy in perfect rout.
-Excerpt from Ninth Army Corps, Fourth Division, Report of Brig General Edward Ferrero

These words describe the first known fight on Virginia soil of a full U. S Colored regiment within the Army of the Potomac during the Civil War. The Spotsylvania theater of the Civil War comprised the pivotal battles of the Wilderness, Chancellor and Spotsylvania Court House, all fought and re-fought through thick, tangled brush twice: May 1863 and again in May 1864.

The 23rd Regiment, U. S Colored Infantry, is one of nine in the Ninth Corps. They were organized at Camp Casey, Alexandria, Virginia beginning November 23, 1863, and served with soldiers from the following regiments of U.S. Colored Toops:

Although only one of the many skirmishes were between the armies of Ulysses S Grant and Robert E Lee, this 1864 period is important because it marks the first time the two generals met directly in war. The soldiers of the 23rd served first right here in Spotsylvania under the general who would later be elected president of the United States.

Soldiers in the War

Some soldiers of the 23rd U. S Colored Infantry were born in Spotsylvania County (including the city of Fredericksburg). Those currently identified are: