Known as the "Crossroads of the Civil War", Spotsylvania is rich in historical 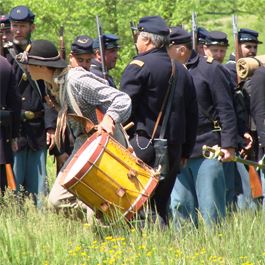 resources. Probably best known for the battles fought on its soil, the County’s strategic location between the Confederate and Union armies resulted in several major battles fought here, including Spotsylvania Court House - one of the bloodiest of the whole war - as well as Chancellorsville, the Wilderness and Fredericksburg. There were more than 100,000 casualties from both sides in Spotsylvania.

The County welcomes visitors to the National Military Park, which memorializes various engagements of the Civil War. These places reveal the trials of a community and a nation at war. Walking tours, guided by park historians, are available seasonally in certain locations, as are maps, brochures and assistance from park historians. In the Spotsylvania Courthouse Historic District, scenic attractions include the Historic Courthouse, Old Jail, Spotsylvania Museum and more.

For a driving tour that includes the many Civil War sites that are off the beaten path go to the Civil War Trails website for an interactive map with GPS tracking to tell you exactly what happened on the site you are standing.

No place more vividly reflects the Civil War’s tragic cost, in all its forms. Retrace history and discover which of these Spotsylvania Civil War sites and historic attractions will be on your must-see list.

Watch the American Battlefield Trust’s 4 minute videos  called In4 video series like this one on "Why did Civil War soldiers fight in lines?"  Explore the African American Heritage Trail on a self guided driving tour.