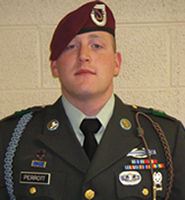 Sergeant Dustin "Dusty" Perrott served in the U.S. Army, assigned to 2nd Battalion, 508th Parachute Infantry Regiment, 4th Brigade Combat Team, 82nd Airborne Division of Fort Bragg, North Carolina. He was killed at the age of 23 from injuries he suffered when a bomb detonated near Miri, Afghanistan on June 21, 2007.

He was a Spotsylvania County native and graduated in 2003 from Chancellor High School. Baseball Field Number 5 at Patriot Park is dedicated to Dustin for his service to our country and selfless actions.

His awards and decorations include: